Here I showcase a solar powered saucer drone aircraft for use in applications  such as aerial surveillance, monitoring and for USB devices that can be powered by the solar array.

The hexcopter craft design is chosen owing to its ability to take off and land vertically, eliminating the need for large runways, as well as the stability of the craft during flight and hovering, with it being sensitiy to precise turns and easy to direct in a small area. 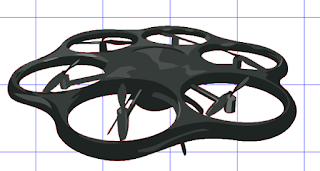 The craft itself is powered by a 2600mAh battery which is then charged by the lightweight solar panel array, greatly extending the flight time.

The craft can also be charged on sight when landed, greatly increasing the potential for automation and reducing dependence on centralized energy infrastructure.

The solar panel array is made of Amorphous thin-film silicon (ATF-Si) solar cells, each having an energy gathering efficiency of up to 20%. These solar cells are light enough to cause no significant weight added to the craft. 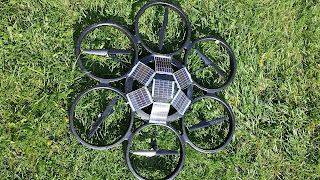 Along with charging the battery, the craft's solar panel array can also power onboard USB devices, such as cameras or even WiFi repeaters or boosters greatly increasing the range and sensitivity of the device. Moreover, such technology could be used as an alternative to satellites in remote locations to send RF signals beyond line-of-sight based communication limits.

The drone controller is itself modified using a 2.4 GHZ line-of-sight directional antenna, which can boost the signal up to 30dB. This booster can be charged by USB cable. 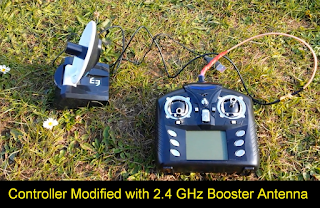 It is hoped that future developments could lead to drones equipped with WiFi repeater technology to assist cameras, communications on the drone and perhaps add significant reception to WiFi infrastructure on the surface, particularly in high density areas such as towns and cities.

Project by MuonRay Enterprises Ireland.
Posted by MuonRay at 05:24 No comments: 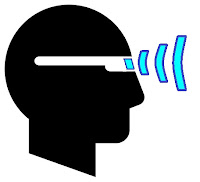 One of the main issues limiting the use of HMDs  is that they can induce dizziness and a feeling of sensory deprivation in viewers, even after a relatively short time of using them. In terms of 3D technology in general, HMDs have generally the worse effects than other types of 3D display systems.

This so-called "simulation sickness" is probably based on the human brain's perception of motion, which becomes compromised in a system which has no sense of depth.

Moreover, having a sufficient lag behind the motion of the camera and the perception would also cause discomfort and a sense of lost balance in the user. Hence a fast transmission of the live camera feed is essential.

The system, in outline, can also include controls for the camera, i.e. if it positioned on a robotic arm mount, gimble or UAV. The user would have to practice sufficiently until a natural feel of control is established whereby the user does not have to necessarily look at the controls themselves and effectively pilot the drone in a similar way that we would control a computer game. 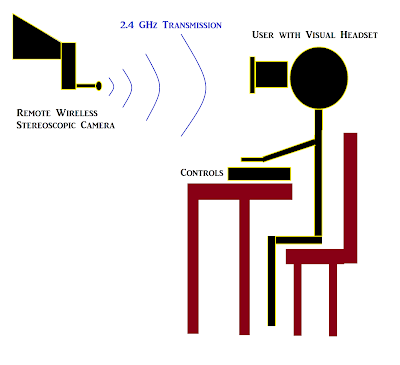 The remote wireless camera therefore is designed to be stereoscopic to record the sense of depth. The camera consists of a split screen mount for a camera which consists of a series of mirrors which receive an image from 2 different viewing points of the target image, forming images of the left and right field of view, and reflects each image using 2 parallel mirrors into the a CCD camera focus for recording and/or transmission. 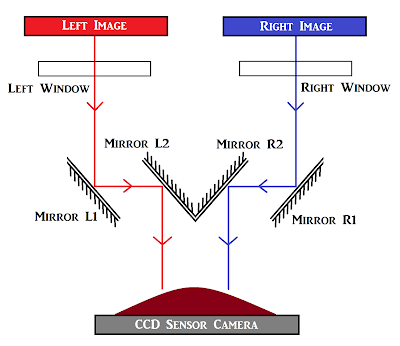 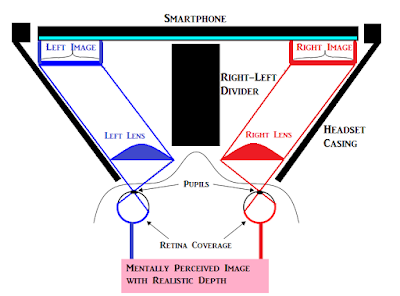 This gives a more realistic and comfortable viewing using a VR Headset which includes the sense of depth which would otherwise be lost if we were simply receiving the image from a single lens camera alone.

This sense of depth is an important factor to be included in augmented reality should we be using this live system for steering a UAV "drone" craft where we want to mitigate mistakes made by the pilot as much as possible. 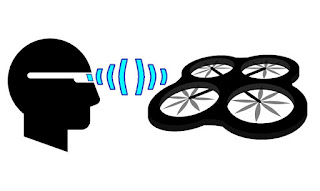 This means we must create as comfortable conditions as possible as to not disturb the pilot and this means creating a visual feed system which is natural to the UAV pilot.

A stereoscopic point of view is more natural for human beings and this helps create the illusion that we are flying from the craft's field of view.

In developing this craft we want to provide lightweight but nonetheless high quality optics.

We have found that by treating the lightweight Plexiglas windows with SiO2 nanoparticles can greatly reduce fogging which can otherwise reduce visibility (particularly in an environment such as Ireland where atmospheric fogs and mists are common). The layer of SiO2 also gives the Plexiglass an extra resistance against scratches and corrosion that plastics are vulnerable to.

Depositing the nanoparticles in water solution is one method to enhance the anti-fogging ability, however it is a wet process and sometimes messy.

We have made further enhancements of this problem by treating a porous glass optic shining cloth, such as those used for shining the lenses of glasses and other optics, with SiO2 nanoparticles and create a layer of SiO2 nanoparticles on the cloth itself which we can lightly buffer onto the Plexiglass windows. (For more see the article written here about the developments made in nano-treated cloths for shining and enhancing optics)

It is hoped that these slight experimental enhancements can give an edge to increase visibility in remote augmented reality and virtual vision systems for use in UAVs and other applications.

Project and Article Designed and Written by MuonRay Enterprises Ireland.
Posted by MuonRay at 13:32 No comments:

A Chemistry Set In The Palm of Your Hand: 3D Printed "Lab-On-A-Chip" Technology

Lab-on-a-Chip (LOAC) technology has many future applications, worthy of exploring in the field of nanotechnology and biotechnology, two subjects which often intertwine. A brainstorm of some of the applications of even relatively simple microfluidic channels, implemented on chip structures, makes them a fascinating technology to study, some of which are shown below:

Many obstacles hinder research and development using LOAC technology. One of the major obstacles is cost of manufacturing the devices for on-demand use and fragility of the devices when made with glass.

This shows that manufacturing these devices is not only cost-effective and practical for those who want to use such devices in a test bed fashion, (or even merely for demonstration), without having to commit to massive investment, both in terms of time and finances, but it also adds to the ability to procure such non-innocuous devices such as microfluidic cells which are often expensive and therefore not readily applicable to people who want to experiment with this interesting technology with a sense of taking a risk with an expensive piece of equipment.

The fact that the 3D printed CAD files can also be modified on site to perfect the device in function with its application, for example making the planar mixing element longer or wider on the circuit, is also the added benefit of having 3D printed devices such as this as more and more elements can be modified and incorporated into the device in tandem with experimental testing, creating an evolution of these devices with their certain applied niche in the laboratory.

The "μLab" Microfluidic Lab-on-a-Chip (LOAC) device itself is designed using Meshlab and can accept 4mm diameter barbed tubing connectors that can feed in liquids to the channel using commercially available 4mm diameter tubing.

We have also treated the interior of the our 3D printed LOAC with Silica Nanoparticles, giving the interior some of the properties of glassware, such as easy flow and cleaning hydrophobic and oleophobic properties. This allows for broader range of uses of this technology. 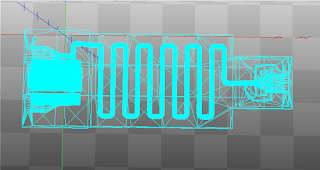 For example, we can in principle place an external array of magnets in the space provided to separate and move about magnetic nano-particles and oil-based ferrofluids inside the microfluidic channel. 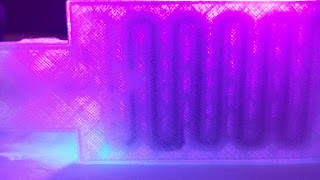 The LOAC is also printed using clear, chemically inert, "HD Glass" Polymer which is transparent to UV radiation, making the identification of fluorescence possible inside the mixing channel. 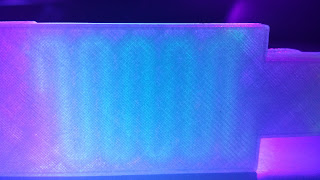 Other developments, using the design of the microfluidic 3D printed circuit, is to place a thermoelectric cooler or resistor heating element for temperature control applications. These can be controlled with very small microcontrollers, such as on an Arduino platform.

It is possible to set up a small Thermoelectric Element to function as a cooler to keep fluids at a certain stable temperature within the microfluidic channel using an Atmel microcontroller, programmed using Arduino. This is possible with the use of a TEC1-12706 Thermoelectric Module. 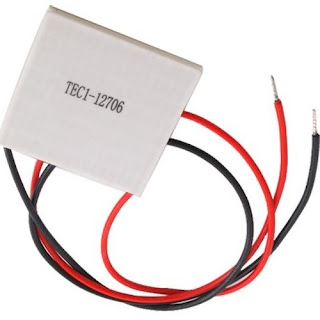 The concept of integrating a LOAC structure with a thermometric element, heat-sink and sensor stabilization system then leads to the overall design concept shown below: 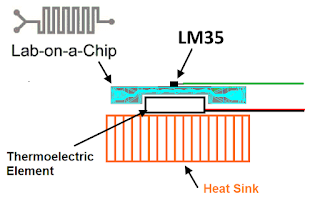 You cannot connect the tablet directly into the microcontroller board, because it will not provide the current needed to heat / cool the unit. Check the datasheet of TEC1-12706 to make sure the voltage and current levels supported. For Optimum efficiency for an external power source, at least 12V and 2 A must be used.

In this way, we can maintain a stable temperature inside the device. Perhaps we would like to maintain the interior at a temperature that matches biology, say 37 degrees Celsius, to carry out some biological process on the chip such as the action of an enzyme for example. Alternatively we may want to use the circuit to simply maintain standard conditions of temperature, i.e. "room temperature" of 15 degrees Celsius inside the channel.

(For this, I used a circuit composed of the Arduino Uno, one temperature sensor LM35 and a 2-channel relay: 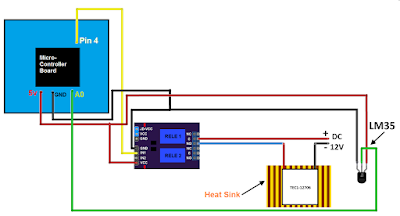 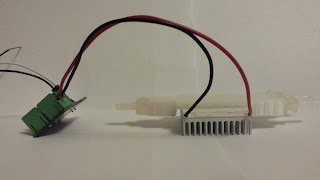 Another idea which could be implimented is to use Piezoelectrics secured parallel to the channels themselves and, using a microcontroller, be programmed to act as a microfluidic pump. All of this greatly enhances the range of applications.

The fact that 3D printing can take place with a wide range of materials means that such chips can either be made to be chemically inert or chemically active, or perhaps more interestingly inert in some regions with controlled activity in other regions of the circuit. Catalysts, either inorganic or organic, could be embedded within the very material the device is made of in a certain region to perform a certain chemical reaction. This controlled tailoring of microfluidics is a very important step in making small scale devices that can perform precise functions on chemical compounds sent in at one end and producing products at the other end - processes that can truly replicate, under controlled conditions, biological and nano technological processes inside a very small space.

Truly, under the proper applications of 3D printing technology, we are entering a very interesting field of technology that will only begin to grow more advanced as 3D printing, nanotechnology and biotechnology fields continue to grow over the next few decades. 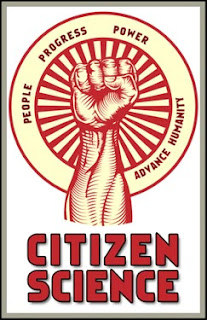 Ongoing projects like this can branch out into many applications, far beyond the abilities of one person or institution.

Hence this is a project in the domain of "Citizen Science" whereby anyone who can print the equipment and use it in an experiment is participating in the development and themselves helping to pioneer the use of LOAC technology in conjunction with the fields of nanotechnology and biotechnology.

We ourselves we be continuing to develop this project further and list potential applications and share the material online here. The .STL files and coding for the μLab Project will be available as further developments continue.

Project and Article Designed and Written by MuonRay Enterprises Ireland