This is an old project I had started about a year ago that has since been discontinued. However I am more than happy to share information to the public. The circuit schematics are all available for download from the OSHPark site

Energy harvesting is a concept that essentially promises to have vast arrays of decentralized energy harvesting stations that can run everywhere and anywhere, operate independently and perhaps run devices such as Internet of things (IOT)  sensors that send data they collect to the internet in which it is in a centralized location for analysis.

The stations themselves are of largely 2 regimes - mobile and immobile.

In both regimes it is important to consider how to increase the autonomy of the sensor stations themselves. The field of ambient energy harvesting boasts to harvest available energy sources from the external environment and power the sensor stations themselves. In order for this to be effective, the energy harvesting must be multifaceted in order to combat the differences between different times of day and different times of year in order to work almost indefinitely.

Multifaceted energy harvesting would work on the same basis of examining the most efficient forms of sustainable energy in the environment which make up the least amount of space and which are the least intermittent (i.e. the least amount of interruption expected in the overall energy supply).


Discussion of Solar and Wind as Energy Sources

By far, solar and wind make up the greatest energy source in an environment and require the least space. Moreover although both can be intermittent energy sources, both systems when hybridized can allow for a reasonable amount of compensation for the relative losses experienced in sun and wind as the conditions during the day and seasons change.

Powering an IOT module from a solar charged battery source is simple in terms of installation and the main obstacle is to make sure the solar panel and energy harvesting circuitry harvest energy even in low light levels. This can be accomplished with DC-DC upconverters and/or high quality, thin film solar panels.

The latest design for my energy harvesters uses the Linear Technology's LTC3105 for energy sources such as solar energy harvesting in low light levels. A PCB board was developed using OSHPark's online ordering service and assembled in my electronics lab.

The energy harvester is tested using a thin-film, flexible silicon solar cell, made by PowerFilm Inc., held in a picture frame.

When relying on solar energy as the power source, for northern and southern latitudes the seasonal dependence on sunlight is an obvious limiting factor on energy supply. The only way to combat this is by placing the solar panels as high as possible above the ground surface to avoid obstacles blocking the light.

The added benefit of power generation by solar energy lies with efficient tracking systems along with simply examining the relative light levels in an area where a solar powered device will be planted.


In order to harvest wind energy we require mechanical knowledge as well as electrical. There are many different wind turbine designs, however to be efficient the wind turbine must work in the direction the wind is blowing.

To do this it must either be designed to steer itself via, for example using a fin on the back of the nacelle, or be a vertical axis wind turbine (VAWT) design that can move in any direction the wind blows. The VAWT design is better for small to medium wind turbine designs for use in energy harvesting.

Here is a video showing how the VAWT was tested using a different energy harvesting circuit that boosts an input DC voltage of 0.8V-5.0V to approximately 5.0V.

By placing the VAWT inside a commercial aluminium flag pole mount, we can in principle plant the wind turbine on almost any surface and point it in the direction of the prevailing wind to harvest power.

Wind energy collection is more subtle than solar in terms of the examination of its dependencies.  The amount of wind available to harvest as energy source at a given time is itself a consequence of the solar energy available in ways that are not so direct as PV solar energy harvesting.

Wind speeds at or near the surface generally decrease after sunset because at night the surface of the Earth cools much more rapidly than does the air above the surface.

As a result of this difference in cooling ability, it doesn’t take long for the ground to become colder than the air above it.

The air in close contact with the ground — say in the lowest 300 feet of the atmosphere — then becomes colder than the air above it.

This circumstance leads to the development of what is known as a temperature inversion. Inversions dramatically reduce the amount of mixing that occurs between different vertical layers of the atmosphere. As a consequence, once the inversion sets up (after sunset), it is much harder for fast-moving air above the ground to mix down to the surface, where it could appear as a gust of wind.

This is why fogs appear typically after sunset or before sunrise. The inversion prevents mixing that would disrupt the fog.


On a clear day when the sun is shining and is heating up the ground much more quickly than the air above it then air near the ground is heated more than the air above say 300 feet of atmosphere and it then becomes very easy for currents to form, as hot air rises and pushed cold air down, which in effect causes the air to mix and can form a cycle of surface gusts. This can be then harnessed by a surface windmill.

However, at sunset the ground will begin to cool rapidly and a temperature inversion will occur as the air at the surface cools faster than the more insulated air in the upper atmosphere. The winds will then be low or non-existent at night after a clear sunny day, in summer for example.

The ground always cools faster than the air but if the temperature inversion is negated somehow the winds will blow day or night.

In some cases cloud and temperature structures exist, in storms for example, that can often overrule the tendency for inversions to set up at night.

Along coastlines air near the surface of the water can remain warmer for longer near the surface than would happen inland. Hence air will move from the relatively warmer coastline towards inland. This becomes particularly apparent in autumn and winter.

Hence having a hybrid solar and wind system can cover a great deal of weather conditions for powering an IOT module as continuously as possible. 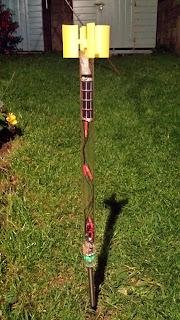 The tube is clear for solar energy to be gathered inside the tube during the day and to function as a "light pipe" of sorts for an energy efficient LED for illumination purposes as a demonstration.

The system is designed to be integrated together by using a small thin film silicon solar panel that has been folded inside the cylindrical perspex tube so that it can gather light from any possible angle without the need for tracking.

Although this technique would be inefficient for conventional solar panels, the thin-film flexible solar panel can generate voltage from diffuse light hitting it from any direction, so that it can generate power from dawn to dusk by solar energy while the VAWT generator can provide a power source whenever the wind is blowing.

Altogether, this design saves on space for installation for a energy harvesting power source for use in lighting, USB device charging, small IOT sensor stations, signal boosters/repeaters and so forth.

We can even place the pipe in conventional fittings, such as commercially available aluminium flagpole mounts. that allow us to move the direction of the pipe to work at whatever angle we figure is to be the best for energy gathering.

The union between energy harvesting and IOT devices has several hurdles to jump across. Hopefully by examining and incorporating more ways to harvest energy from the surrounding environment these hurdles can be worked on by engineers who want to make, in essence, networks of self-powering, efficient and highly versatile electronics. 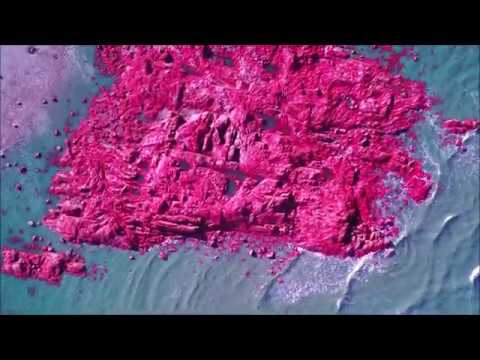