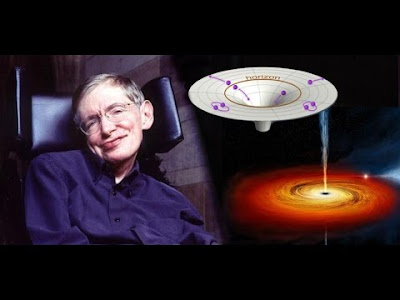 Professor Stephen Hawking has said that a black hole with a true point of no-return for information, known as the 'event horizon', from which nothing can escape may be incompatible with general relativity and quantum theory. At first sight we may be tempted to think Hawking is making contradictions, however this statement has considerable theoretical reasoning to it and very strong consistency on what we know about what the existence of a black hole means for general relativity and quantum mechanics; the 2 flagships of modern physics.

Stephen Hawking predicted in the 1970's that if an event horizon exists around a black hole then virtual particle-antiparticle pairs should form there from vacuum fluctuations spontaneously out of nothing. One particle in the pair should fall into the black hole, leaving the other to escape as so-called Hawking Radiation.
A single emission of Hawking radiation therefore involves two mutually quantum entangled particles, formed from vacuum fluctuations in the vacuum of space. The outgoing particle escapes and is emitted as a quantum of Hawking radiation; the in-falling particle is swallowed by the black hole as it crosses the event horizon. 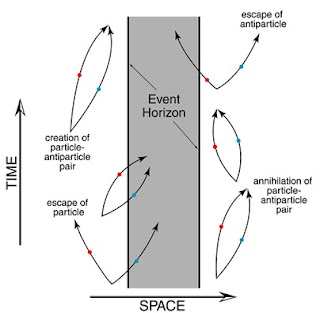 
Stephen Hawking also worked out the quantum mechanical argument linking a black hole's entropy to its surface area by providing an equation for calculating it. 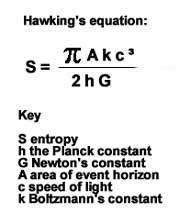 The black hole's entropy, S, is proportional to the area of its event horizon, the surface within which even light cannot escape the gravity of the hole.
Specifically, a hole with a horizon spanning A Planck areas has A/4 units of entropy.

Considered as information, it is as if the entropy were written on the event horizon, with each bit (each digital 1 or 0) corresponding to 4 Planck areas, which we will call a Planck cell. This shows mathematically that the entropy of a black hole equals the number of Planck cells that it takes to cover its event horizon, so that each Planck cell carries one bit of information.

Take the event horizon of a black hole and divide it into a grid-like pattern in which the sides of each cell are one Planck length (10-33 cm) long. Hawking proved mathematically that the black hole's entropy is the number of such cells needed to cover its event horizon - the black hole's surface area, that is, as measured in square Planck cells (10-66 square cm per cell).


In the language of hidden information, it’s as if each such cell secretly provides the answer to a single yes-no question delineating some aspect of the black hole’s microscopic makeup.

Why would the amount of information be dictated by the area of the black hole’s surface? Information contained in a book is determined by certain information we get from inside the book and not the surface; we cannot judge the content of a book by its cover.  Nevertheless, when it comes to black holes the information storage capacity is determined not by the volume of its interior but by the area of its surface and this comes straight from the mathematics.

This is somewhat hard to grasp as in everyday routine we do not deal with such micro details. This came as surprise (since confirmed by both string and quantum loop theories), and is thought of as being a spacetime analogy of optical holography - such that information storage capacity is being determined by the area of a bounding surface and not by the volume interior to that surface.


We can make further analogies between the nature of spacetime and the nature of optics to create analogous observations of some of the phenomena associated with black holes without having to actually visit or create them.

In recent years, physicists have been toying with laboratory experiments that imitate the physics of an event horizon using entangled pairs photons created using non-linear optical crystals, such as KTP and BBO, pumped with photons at a fundamental frequency.

(a) Diagram depicting the dynamics of Spontaneous Parametric Down Conversion, which pasees a pump laser through a non-linear crystal to generate 2 entangled photons, a signal and an idler. This is accomplished by Initial vacuum modes in the non-linear crystal.
The nonlinear interaction is generated by a system possessing a second-order susceptibility χ(2).

(b) Equivalent dynamical elements involved in the Hawking Radiation process.


According to this research into the nature of entanglement, the outgoing particle in a black hole must be entangled with all the Hawking radiation the black hole has previously emitted. This creates a paradox by the very reason that a principle called "monogamy of entanglement" requires that, like any quantum system, the outgoing particle cannot be fully entangled with two independent systems at the same time; i.e. The "No-Cloning" Theorem is in play. (click the link to read about this axiom in quantum entanglement theory in more detail.)

Yet here the outgoing particle appears to be entangled with both the infalling particle and, independently, with past Hawking radiation. How can this be? Is the paradox a fault of our understanding of quantum theory?

Quantum field theory has been so accuratley tested with experiment that it cannot be the source of the problem, To quote Richard Feynman, quantum theory has been tested to the equivalent of testing the width of North America to an error of the width of a single human hair.
Therefore, if quantum mechanicsis not at fault, the very laws of physics which govern particles on small scales, should change the situation completely in order to circumvent the "No-Cloning" theorem in order to make the Hawking Radiation Process possible. Quantum theory therefore requires that the event horizon must actually be transformed into a highly energetic region, or 'firewall', that would violently destroy the entanglement to a crisp, A process that would destory quantum entanglement would require huge amounts of energy to transform spacetime into a highly non-uniform foam. 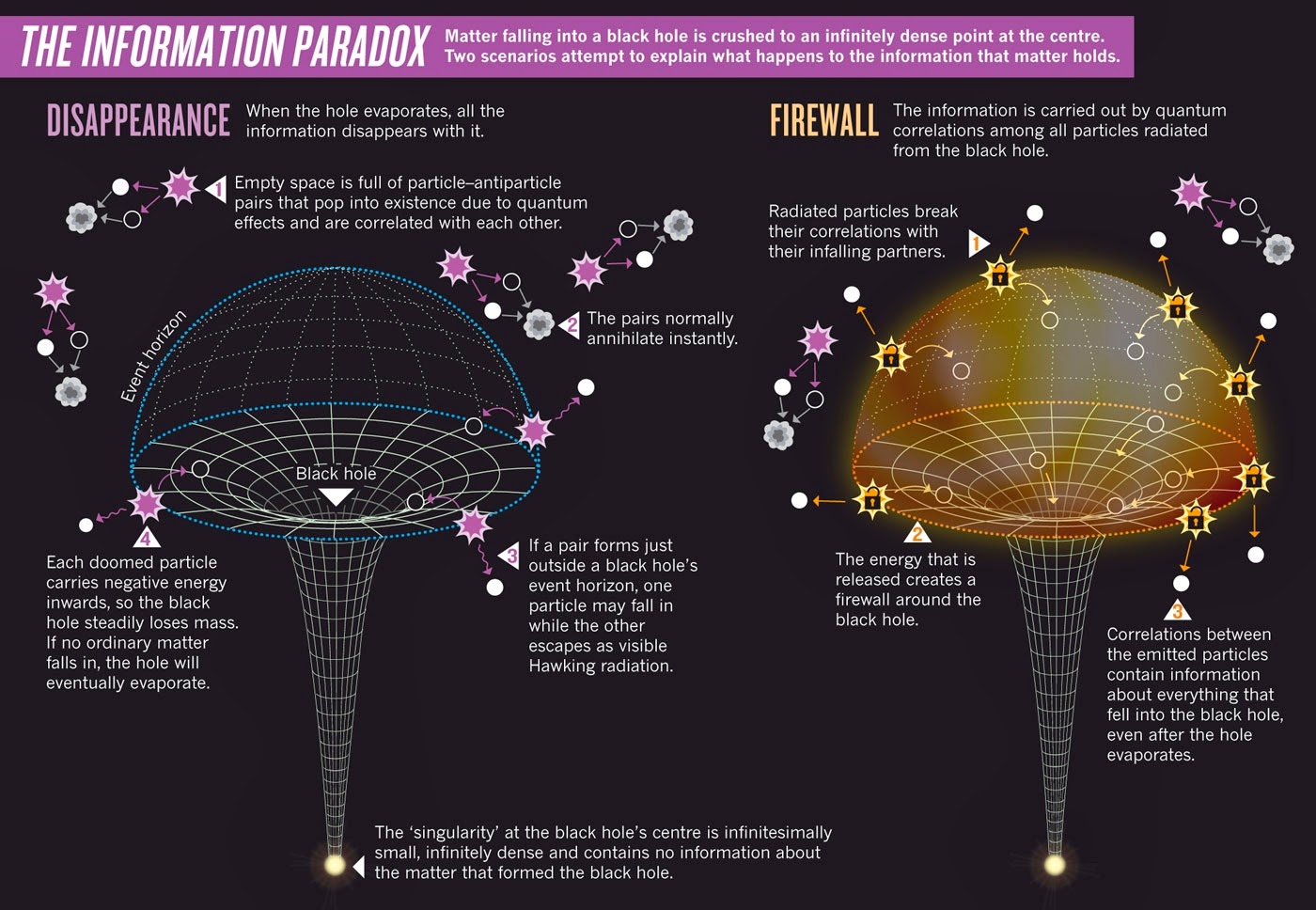 This was alarming because, although the firewall obeyed quantum rules, it flouted Einstein's general theory of relativity. According to that theory, someone in free fall should perceive the laws of physics as being identical everywhere in the Universe — whether they are falling into a black hole or accelerating in empty intergalactic space.

This is because, in relativity, there are no absolute reference frames. An object in free fall in a gravitational field should experience the same laws of physics as an object under acceleration. This is called the equivalence principle between the gravitational mass and inertial mass of an object.

"There is no experiment that can be done, in a small confined space, which can detect the difference between a uniform gravitational field and an equivalent uniform acceleration".

The diagram below alludes to a man in an enclosed box. On the left, he feels a downward force equivalent to [1g], while, on the right, the same box is being accelerated upwards with a matching force. However, the man’s inertial resistance to acceleration makes the upward acceleration of the box feel like a downward force of [1g]. 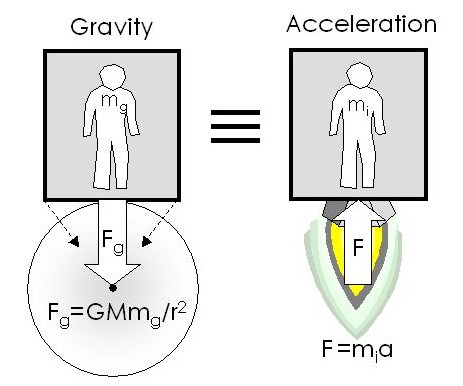 The equivalence principle is very helpful in illustrating Einstein’s insight connected with the bending of light in a strong gravitational field in General Relativity. The following diagram illustrates the effect of a light beam shining through the window of an accelerating spaceship and then argue what applies in the accelerating system must also apply in an equivalent gravity system. 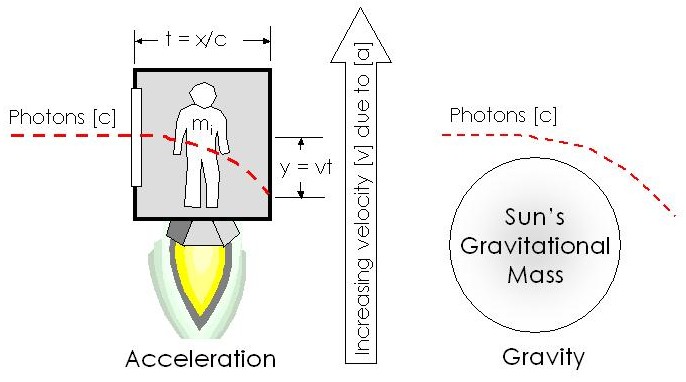 In the diagram, we have our accelerating box, but this time we have a window that allows photons, travelling at the speed of light [c] to enter. If a photon entered at time [t0], it must take a finite time for the photon to travel across the width of the spaceship [x]. This time [t] equals [x/c] and because of the upward acceleration of the spaceship, the path of the photon is curved downwards. The diagram on the right alludes to an equivalent configuration where the photons pass a large gravitational mass, e.g. the Sun.

"There is no escape from a black hole in classical theory," Hawking told the science journal Nature online. Quantum theory, however, "enables energy and information to escape from a black hole". A full explanation of the process, the physicist admits, would require a theory that successfully merges gravity with the other fundamental forces of nature. But that is a goal that has eluded physicists for nearly a century. "The correct treatment," Hawking says, "remains a mystery."
In place of the event horizon, Hawking invokes an "apparent horizon", a surface along which light rays attempting to rush away from the black hole's core will be suspended. In general relativity, for an unchanging black hole, these two horizons are identical, because light trying to escape from inside a black hole can reach only as far as the event horizon and will be held there, as though stuck on a treadmill. However, the two horizons can, in principle, be distinguished. If more matter gets swallowed by the black hole, its event horizon will swell and grow larger than the apparent horizon.
This modification, from a true event horizon to a more subtle one removes the unlikely formation of a cosmic firewall from the picture therefore making black holes possible but with less constricted rules regarding their event horizon.

Hawking posted his paper on the nature server on 22 January 2014. He titled it, whimsically, 'Information preservation and weather forecasting for black holes',

The paper was based on a talk he gave via Skype at a meeting at the Kavli Institute for Theoretical Physics in Santa Barbara, California, in August 2013.﻿

Hawking's comment that "There are no black holes" may have shocked the world, however on closer inspection we realize that it is not so shocking after all.

What could be more shocking is if Hawking turns out to be wrong, and that black holes do exist. Then a more radical explanation is required to solve the paradox without General Relativity or Quantum Theory being violated.


One of Hawking's old rivals, the father of modern String Theory, Leonard Susskind has such a radical resolution to the paradox. 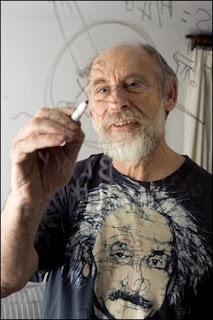 
Professor Susskind suggests that if a wormhole can form between two black holes, the wormhole behaves as if the two black holes are entangled, hence wormholes can be though of as the physical manifestation of entanglement.


Extending this idea to a single black hole and its Hawking radiation, results in a new kind of wormhole which can form entanglement between the all radiation emitted from the black hole by wormholes linking the radiation in space and time. 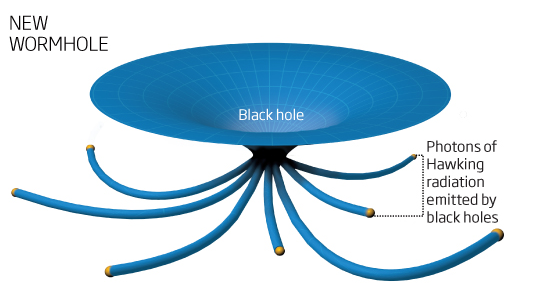 
Crucially, it is suggested that this new wormhole, which links a black hole and its Hawking radiation, may not be a problem for quantum monogamy in the way that normal entanglement is. As a result, the firewall needn't appear in the first place, preserving General relativity, hence keeping the black hole fully black after all.

The result is then a black hole creating an infinite amount of wormholes linking the Hawking radiation to the black hole, creating a network of entanglement throughout the universe.

This then raises a more interesting and profound question - do the entangled particles, which themselves engage in the “spooky action at a distance” between each under in the context of the EPR paradox in quantum mechanics(named for its authors, Einstein, Boris Podolsky and Nathan Rosen) then also operate as though they were connected through far reaches of space through “wormholes” (or ERs, for Einstein-Rosen bridges)? Does this reveal that EPR particles ARE in fact Einstein-Rosen bridges? Does ER= EPR?

These theories, although speculative, are an example of some of the surprises we may uncover by attempting to unify the nature of quantum mechanics with general relativity.

Ultimately this picture is providing us with a greater respect for how mysterious and counter-intuitive the fundamental laws of nature really are.