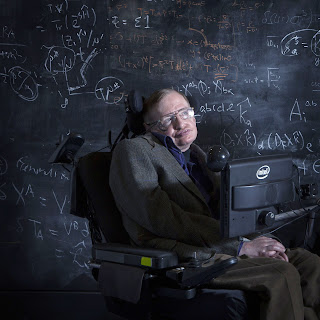 Professor Stephen Hawking was a master at imagination. His mind was able to think about abstract concepts at the fringes of the field of theoretical physics that really represented what it truly means to be passionate about the vision of ones ideas.

Hawking's thinking took place at our time in history when so much physics has been done by the giants that came before us - Galileo, Newton, Maxwell, Einstein, Feynman, that we can really now begin to ask the strangest and deepest of questions that require unification of known physics and an expansion into territory still unknown and perhaps unknowable. Hawking had no fear of physics at this level. His reputation and accolades were, in a field normally obscure from ordinary life, the stuff of legend among scientists and the general public alike.

Over the last week we have heard the many tributes to his genius. Important too is to recognize the nature of the great man's way of thinking.

We have often heard the anecdotes of the way the great people of history have thought about their subject. Hawking was undoubtedly a scientist of great mental patience and care, perhaps out of necessity but ultimately because in doing physics without the aid of things most of us take for granted.

He had a mind that was trained in not only the nature of the "thought experiment" as championed by Einstein but of long-term and pensive thinking about the big picture of ones ideas that was undoubtedly Hawking.

Hawking's theories of physics create some of the greatest questions and motivations to understand the great flagships of modern physics, General Relativity and Quantum Theory. From Hawking's Theory of Radiation emitted from black holes and his relationship derived between the entropy of a black hole and its event horizon are some of the incredibly interesting consequences of linking these great theories together which Hawking was developing in the 1970s.

More interesting are the modern questions that arise when the consequences of Hawking's past work in the then lead to paradoxes due to inherent problems in matching the equivalence principle of General Relativity and nonlocality of Quantum Entanglement, such as the Firewall Paradox to which Hawking worked on a solution toward decades later, one which is beginning to lead to even greater solutions that would not have been considered otherwise, not least of which are the potential links between entanglement and wormholes in the ER=EPR paradigm, transforming the debate in what it might actually mean to link Quantum Entanglement with General Relativity. Linking the realm of the Planck length with realm that spans across Galaxies.

The big picture of physics was always characteristic of Professor Stephen Hawking and was done so with a patience that was one of a kind. His life in physics is a lesson that one must nurture thinking of this nature. None of the solutions to the problems we face, both in modern science and in our lives, are best left to quick fixes. An intelligence matched with care, patience and a nurturing of an idea with a definite vision, The Hawking Method as it were, was a treasure Professor Stephen Hawking shared with us.